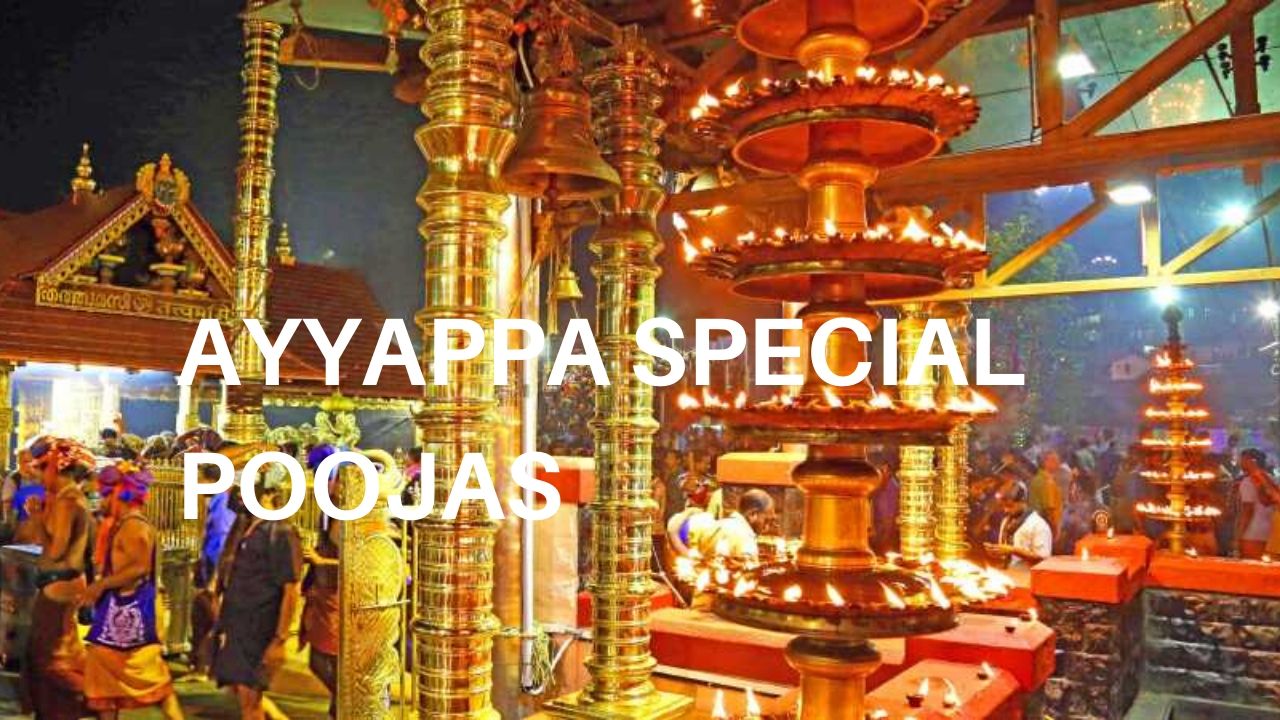 ‘Neyyabhishekam’ – Neyyabhishekam is the most important offering to Lord Ayyappa. The ghee filled coconut is used to perform this ritual. The ritual starts at 4 AM and continue till Ucha Pooja (1PM). After performing the darsan of Lord Ayyappa and upa-prathistas, the group of Ayyappa pilgrim will make a Viri under the leadership of Guruswamy. They collect all ghee filled coconut and arrange in the viri.

After taking bath at Bhasmakulam, the team leader, usually a Guruswamy will break all ghee filled coconuts and collect the ghee in a vessel to offer it at the Srikovil.

The priest after performing the Neyyabhishekam will return a portion of the ghee back to the devotee. The ghee obtained from the Srikovil is taken back as a divine prasadam. For devotees who don’t bring ghee filled coconut, Devaswom board has arranged facility to get “Adiyashistam neyyu”.

The ghee symbolizes the human soul and through the abhishekam of the ghee on Lord Ayyappa the soul merges with the Supreme Being. The jeevatma is ghee and the paramatma is Lord Ayyappa.

Once the ghee is removed from the coconut, then the coconut symbolizes Jadam or dead body. This is the reason why the coconut is then offered in the huge Aazhi or fire in front of the temple.

‘Padi Pooja’ – Padi Pooja, pooja of the 18 holy steps ‘Pathinettampadi’ is held on select days after the floral bathing of the idol called ‘Pushpabhiskeham’. The pooja is conducted in evenings and is performed by the Tantri, in the presence of the Mel Santhi. The hour-long ritual by decorating the Holy Steps with flowers and silk cloths after lighting traditional lamps on each step, concluded with performing “aarathi” by the thantri.

‘Udayasthamana Pooja’ – Udayasthamaya literally means from sunrise to sunset. Hence it implies worship from sunrise to sunset. Udayasthamana pooja is conducted from dawn to dusk (from Nirmalyam to Athazha pooja). In addition to the Nithya pooja, special poojas with Archanas and Abhishekams are conducted to obtain the “Anugraham” of Bhagavan which enables to fulfill the wishes of the devotees. Out of the total 18 poojas, 15 are done before noon and there are 45 kalasabhishekams.

‘Sahasrakalasam’-Sahasra Kalasam is an offering to Hariharaputhra (Sri Dharmashastha) as per the Thantric Veda and Agama Shastras with a view to sleek blessings for the happiness of the mankind. It is the noble effort to invoke all the holy spirits utilizing all that is sacred in the form of incense, the precious and semiprecious stone, the seven seas, and the sacred rivers into the holy kalasam (Sacred Pot) of gold, silver, copper etc.

‘Ulsavabali’ -The rituals of Ulsava Bali begins with the sounding of Paani .Ulsava Bali is dedicated to the Bhoothaganams (associates of the presiding deity) and Paani is meant to invite the Bhoothaganams. Then begins the sprinkling of cooked raw rice (Ulsava Bali Thooval) to cover the balikallu of the Bhoothaganams around the Naalambalam and Balikkalpura by the temple Thanthri. When the sprinkling of the cooked rice over the Saptha Maathrukkal is completed, the Thidambu of the presiding deity is taken out of the sanctum sanctorum to enable the devotees to offer prayers.  Ulsava Bali is held as part of the annual festival at the Lord Ayyappa Temple.

‘Kalabhabhishekam’ – Kalabhabhishekam is a very important special pooja usually performed for the strengthening of the chaithanya of the Deity. As part of kalabhabhishekam, Thantri performes the Kalabhakalasa pooja at the Nalambalam in the presence of Melsanthi .

Kalabhakalasabhishekam, marking the conclusion of the ritual by pouring the sandalwood paste on the idol of Lord Ayyappa, is performed during the Ucha pooja by the Thantri after the procession carrying the golden urn having sandal paste for the Kalabhabhishekam around the Sreekovil.

‘Laksharchana’ – ARCHANA means “chanting and glorifying the Divine name”.  LAK means 100,000. Therefore, LAKSHARCHANA is the name and practice of repeating in a group, the name of the Lord in the form of a Mantra.

Later, the Thantri, assisted by Melsanthi and some other priests performs  Laksharchana at the Sannidhanam. The `Brahmakalasam’ of the laksharchana is taken in procession to the sanctum sanctorum for `abhishekam’, prior to the `uchapuja’.