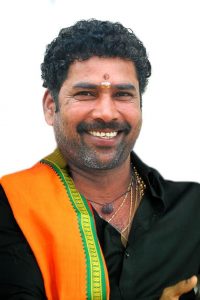 Ronda. Mallareddy, Age-45years resident of Pudur Village is a farmer by profession and then later switched into Real estate. He is a strong believer and Devotee of Shri. Ayyappa Swamy, Sabarimala.
Mr. MallaReddy has worn 41-days Ayyappa Mala from almost 18 consectuive years starting from 2001.During the early times in 2006, he has got an idea and decided to construct a temple for Ayyappa swamy in his own village.

He intention to construct this temple is to preserve and safeguard Hindu culture for next generations.

The Complete Temple Architecture is designed by him and the sculpture, idols are been fine tuned completely with Rock. The expected launch of this temple was published on Nov 22, 2019.

Despite of this, he has also built Shivalayam in 2016 in Pudur Village with in awesome atmosphere.